I’m curious… How many of you watch during the Today show? How many of you switch over once 7am hits? What other channels do you flip thru during your morning routine? Or do you park it on 13?

Here are a few of the stories that got our attention today:
PRESIDENT’S “SURGE” SPEECH TONIGHT
Pat and I assumed that our station and all the major networks will carry this address live at 8pm. (I’ll be shocked if anyone decides to keep with normal programming – this is a much-anticipated speech)
Reportedly he’ll call for up to 20,000 more troops in Iraq, along with some diplomatic measures, and requirements from Iraq’s own government.
Our Iowa Nat. Guard spokesman told us he doesn’t expect the change to affect Iowa deployments this year. That wasn’t enough to comfort a military family we interviewed, though. I’m sure many people with loved ones enlisted, in the guard or reserves, or who are serving currently will be watching the speech and wondering exactly how their family will be affected.
Pat here: apparently MSNBC is planning an entire day’s worth of coverage on the new plan, Iraq, and the future. So tune in our sister cable network during the day then back to WHO during our evening newscasts.

SCHOOL DECISIONS
I talked DM school board prez Marc Ward into coming into our studio for a live 6am interview to follow up on last night’s meeting. He tells me he’s NOT an early riser, and the meeting was a long and late one, so I really appreciate his willingness to wake up before the sun to answer our questions! (It’s sometimes the toughest part of my job – convincing people to wake up at an ungodly hour and go on television!)
There were 2 big decisions last night – the Beaverdale field where Rice School used to be will be sold to Rice Development Partners, which will turn it into a retail-housing complex. Ward told us a neighborhood group that offered to buy the space was late in the game – the decision had really already been made – and a committee felt that the initial sale plan was the best for the school district, and would be good for the area. Still, there was plenty of heated protest from neighbors passionate about keeping their park green.
Delaying the closure of Edmunds Academy and the move of Central Campus was the other big vote – a unanimous “yes.” Supt. Sebring pushed for this, saying they needed more time to work out details before making such a drastic change. So far I like her measured approach to things in the district.
Pat here: I asked Ward this morning…because I’m confused.

Maybe Mrs. McGinley’s third grade map reading lesson is a little fuzzy in my head but the way I read the map…One of the nicest green spaces in the city is blocks away from the site where these neighbors want to keep an open field.
I don’t live there and I am sure some of these people feel passionately about the old Rice school site, but I am also a taxpayer. In a time when we are constantly looking for more of a tax base in the city of Des Moines, new housing and retail are much higher on my list than green space that won’t be drawing any tax dollars.
Now if the neighborhood group wants to buy the land and pay the property taxes on the site every year…have at it. Otherwise, let the development deal that’s been worked on for months go through.

Also, I heard some of this discussion and I guess I find it hard to take objections seriously when the people who spoke to the board last night talked about the development “ruining Beaverdale” or the development making the main drag in Beaverdale like, “Merle Hay Road”. The dramatics are a little over the top.
If there’s a real objection here…If you don’t think it’s a good deal for the schools, if you think the board is being fiscally irresponsible, let them know and back it up with the numbers. I respect your right to object.
But, the idea that a housing development on a few acres of land is going to be the demise of one of the older and more well established neighborhoods in the city is a little far fetched.


ABANDONED HOUSE FIRE
This isn’t huge news, but just fell into the category of “interesting” and “new overnight.” An abandoned house on 9th street caught fire – right next to a DM Fire station. Chopper 13 gave us a good view showing how close the two are.
They saw 3 people leaving (I think the assumption is they were homeless and trying to stay warm) but firefighters told us they didn’t expect charges to be filed.
An update is due here: The people who broke in were arrested and are being charged with burglary. The fire was in a fireplace and apparently the chimney didn’t work. That’s why the fire started in the attic.

KIDS MAKE YOU FAT?
Read it and weep, parents! Apparently we moms and dads keep more fatty convenience foods around, and we eat it – even if it’s “for the kids.” I personally have a weakness for cookies of any kind, while my hubby can’t keep his hands out of the gummy snacks (which are really called “scummy nacks,” according to Calvin)
A link to the University of Iowa-led research on parents’ diets!

MISSIN MISS RITTER
I’m sure Jeriann will be glad to see some of you viewers miss her! She’s 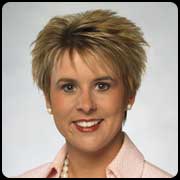 been filling in for Ed on evenings, and I’m pretty sure she’ll be back in the AM saddle next week.
We’re thankful to Megan and Justin who’ve thrown their schedules out of whack to help us out in the mornings! I know our shift is a tough one to jump into, and we appreciate it!

Ships passing…
Talking about the weird shift hours made me think of the really nice surprise I had when I woke up at 1:30 this morning… a sweet note from Ian on the table. I often go to bed before he gets home from work at night, so like passing ships, we write notes and call each other later to catch up. I don’t know what it’s like to have a “normal” schedule – for those of you who do…is it all it’s cracked up to be?

The Buzz reaches the Windy City
One of our most loyal readers is my Aunt Corky who works in the Tribune Tower downtown Chicago! I don’t think she ever misses a day! My mom 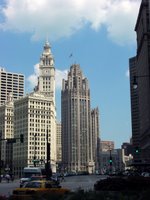 tells me Corky was so excited that I posted her picture here the other day, that she jumped out of her seat in the office and yelled, “I made the blog!!!” I’m sure her co-workers were wowed.
Truly, it is an honor and privilege bestowed upon only a lucky few.
Write in sometime, Corky! I know you have more than 2 cents’ worth to share on everything!
Have a good Weds, everyone! I’ll let Pat take it from here!
Trish

Global warming?
We had a small tidbit on 2006 being the warmest on record. The story said scientists were studying how much greenhouse gas emissions were the culprit and how much an el Nino weather patter contributed. Now I know greenhouse gases have an effect on the atmosphere, and I know our actions have an effect on the environment…but a little perspective on this is in order. I am no scientist…and i have no science background…I haven’t seen An Inconvenient Truth…but I have a question…Haven’t we been keeping records on the weather for a few hundred years? saying this is the warmest year on record is like saying it’s the warmest minute of the day when you’ve only been keeping track for ten seconds. We may in fact be ruining the planet and I am all for the reduction of greenhouse gases, but not because I think Minnesota will be a desert by 2019. I guess all I’m saying here is that the “trends” scientists talk about a blips on the timeline of there planet’s history. Do we have a part to play in the health of our environment…You bet. But I’m not betting on Iowa winters being without snow anytime soon.

Hall of Fame:
Cal Ripken Jr and Tony Gwen made it into the Baseball Hall of Fame yesterday. I am a mildly passionate baseball fan and more to the point…a fan of these two guys. Even though Gwynn put a bullet through my heart when he finished off the Cubbies in the 1984 play-offs, it would be hard not to respect his career.
As for Ripken…One of the best weekend’s in my life also involved a Cal Ripken Jr milestone.

I’d gone to Washington DC in 1998 to surprise Sally and ask her to marry me. The engagement plan went off without a hitch and we went back to Baltimore, where Sally was attending Johns Hopkins University. The morning after we were engaged we were back in her apartment…I was watching TV and she was studying. I saw the orioles were playing at Camden Yards that night against the Yankees and thought it would be a great time.
Down at the ballpark we used the “no scalp zone” where ticket holders can sell their extra seats for face value or less.
We ended up five rows up on the third base side sitting with the guy who sold us the tickets. Sally was showing off her ring and we were getting acquainted with the folks around us when the game started. We hardly noticed the guy standing at third base.

When the Yankees made the first out…the entire dugout took one step on to the field and tipped their caps. It took us about three seconds to realize Cal Ripken had decided to end his streak of 2,632 consecutive games played that night. The place erupted. It was one of the coolest things that I’ve ever been a part of. The people we were sitting with tracked down a program from that night and gave it to us…Our first engagement gift. We’ve still got the tickets…and the program.
Sally and I joke, because the real story for us that weekend was the engagement, but whenever anyone asks about how I popped the question, I always throw the Ripken story in as well. It was the second best thing that happened to me the weekend of September 19th 1998.

Have a great day!