Good Morning,
By the mercies of all things holy Trisha made it to work as did our producer Heather. As Heather said this morning…It’s nice to be missed…both of the ladies were.

Pentagon Report
We began this morning with a bleak picture painted by the Pentagon in Iraq. The report on violence basically says that Iraq is a more violent and deadly place today than it was almost three years ago.

Vilsack in Marshalltown
The gov is going to Marshalltown today, his first visit there since the raid on the Swift plant. It will be interesting to see the reception he gets. Vilsack already had an appearance planned for today to campaign for president.

Vilsack On Comedy Central
I thought the Gov acquitted himself well on The Daily show with John Stewart. No matter your political views, you have to admit Vilsack is a smart guy. His smarts also make him quick witted which he needed last night. The best part about his appearance is that he didn’t try to force it. He had some bad one liners that are par for the course on that show. He showed he can laugh at himself and that he can shift gears quickly from serious to fun. If you want to watch the whole thing…here’s the link…here’s part 2 We hear the Tonight Show may be next.
By the way, Vilsack is starting to get some press nationally.
political columnist David Broder, a frequent contributor on Meet the Press, writes about him today in his syndicated column.
I think I’d be shaking in my boots to go up against someone as witty and quick as Jon Stewart. There were a few kind of awkward moments, but for the most part I think our Gov. did well. I wonder if Stewart will take him any more seriously as a candidate now? -TS

Underage Extension
Des Moines City Council members moved forward on an ordinance allowing minors to stay in bars later than they can right now. The idea is to give kids more access to live shows. If there’s an audience, bar owners think they can get more live events downtown, and…Well you get it…it benefits everyone. I even heard a city council member on the radio take up the argument that keeping kids in bars later would lead to LESS teen drinking. I’m not sure how that’s going to work, but even if the only argument was more live music, I think it’s a good attempt to make downtown more viable.
Here’s a totally biased opinion and I’ll admit it – I like the idea of letting young people stay out later to see live music, as long as they’re checking ID’s vigorously to prevent underage drinking! My husband is a musician, and of course it benefits him greatly to have an audience to play for! I’ve read a lot about young people’s complaints that “Dead Moines” needs to revv up its music and bar scene, this seems to be at least a step in that direction.

No Smoking
apparently the City leadership wants to make sure you can’t have a smoke on the way from the car to the skywalk. I am not quite sure who’s going to enforce this one. I haven’t seen a lot of police presence in the parking garages. I get the idea that you don’t want people smoking indoors where I have to breathe the air…I am not sure I can sign on to tell people not to smoke at all. If that’s your opinion…That’s fine, but I guess I’m not for legislating what people can and can’t do on their own time when there’s no evidence it’s hurting me. I hate to open up a can of worms, but what do you think?

First Lady Cancer Scare
I saw CNN.com make a big deal out of the fact that the first lady didn’t announce that she’d had a tumor removed from her leg in November. She called it a , “private matter” and in this case, I’d tend to agree. Do we really have a right to know what’s going on with the First Lady’s health. Is it a matter of National Security? I understand why we all should be concerned about the President’s health. In the case, however, of a common and curable form of cancer, I’m not sure the media has any right to get indignant with the First Lady’s office about not making this public right away.
No one elected Mrs Bush and she has nearly as much right to her medical privacy as we do.

Miss USA
Let me first say how little I care about this story. If the girl who was selected in a beauty pageant wants to go nuts in the NY bars…Have at it. I’m not endorsing 20 year-old doing coke and dancing on tables, but really…We’re worried this is the girl that kids are going to look up to?

On a list of all the people I’d want my kids to look up to…Miss USA isn’t there and this is why. She hasn’t done anything to distinguish herself as any sort of a role model.
In a day and age when 18 year-old men and women are signing up to fight for their country or distinguishing themselves and scholar athletes, or (here in Iowa) even running for local office…I have a hard time fitting the winner of the talent competition on my list of people to look up to.
So, thank you to Miss USA for making sure there’s no doubt about it.
And before you fire off your responses about being in beauty pageants and how it’s for scholarships and how these women really work hard at this stuff…I’m sure they do. I’ve met a lot of people who were in the pageants as kids and they had a great experience… I’m glad for them.
I work hard at my job. When I was a kid, I worked hard at hobbies(and that’s what those talent are). I even wanted world peace or a cure for AIDS or to help the homeless. Those are the basics. Those are the things we want every kid to aspire to.
To get to the list of people we look up to…You have actually do something extraordinary. All she’s done is get her name in the tabloids. If she really was the kind of young person we should be looking to as a future leader…She wouldn’t have squandered the chance by putting herself in compromising positions that, at the very least, lead a reasonable person to question her judgment.
And the worst part of this is…that’s five minutes of my life I’m never getting back…We’ve already spent too much time on it.

OWWWWW…
I’m glad to be back to work today. Really and truly! I was in excruciating pain yesterday after turning my head wrong and feeling a muscle go – SNAP! I tend to do that at least once a year, at the worst-possible time! (sorry, Pat, to have abandoned you at a time of short-staffing!) I could hardly move until I got to the doc, got an injection of some anti-inflammatory stuff, and got some knock-you-out muscle relaxing pills! I’m still not great today, but WAY WAY better than yesterday!

A NEW OBSESSION TAKES OVER! 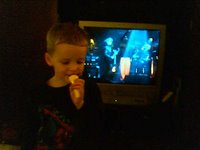 For those of you who found my son’s zombie fixation funny, here’s the latest one – we got him a little “Mr. Microphone” toy, and he’s been singing along NON-STOP to a video of a rock band Ian used to play in. (Temple of Low Men – didn’t know they still had a webpage until I just looked it up!) Calvin knows every word to the song “Not for

Nothing,” and he imitates every gesture the singer makes! He always asks us to turn the music up “totally loud.”
“Not for Nothing” has been his favorite song since before birth. I went to watch the band perform while I was very pregnant with Cal, and he rocked so much during that song that I had to get away from the music because he was making me seasick!
Looking at this photo makes me remember how much I miss hearing this band play. It kind of fell apart soon after we moved to Des Moines…like a lot of long-distance relationships, it was too hard to keep things together when people moved apart. 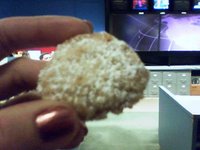 If you noticed any powdered sugar or chocolate on our mouths today, it’s because I brought my annual pile of Christmas Cookies to work today! These little powdered sugar ones are my favorite – it’s a secret family recipe, only kept secret because I’m embarassed by how simple it is! At least they sweetened people’s mood a bit today!
See you all tomorrow!
Trish

Poll: Most Iowans Would Not Attend Sporting Events Amid Rising Virus Cases

These Jack-O’-Lanterns Are Huge

McRib is Back: McDonald’s Fan-Favorite Available Nationwide for First Time Since 2012

Poll: Most Iowans Would Not Attend Sporting Events Amid Rising Virus Cases