Recommendations:
The Iraq Study group finally makes its recommendations public this morning after weeks of speculation about the contents of its report. I’ll be the first to admit that the speculation on these recommendations has been a little over the top. I understand everyone wants to know what this group is going to say…I understand this could be the beginning of a major change of course in the war. What I don’t understand is why we don’t just wait for the report to be released. I get trying to find out a day or two early, but I feel like we’ve been talking about the recommendations for a week now. I guess I’d worry about not seeing the entire report. If we hear for a week that the recommendations are going to include this or that, and we don’t see it in the context of the full report, we may misinterpret the study group’s work as a whole.

Don’t Forget the “Other” War:
Violence in Afghanistan claimed the lives of two more US soldiers. While it’s not getting as many headlines as Iraq, the situation in Afghanistan is still tenuous. It’s going to take time for the situation to stabilize. I talked with Rep Steve King a week or two ago after his latest visit to Afghanistan, and he said the thing the country needs most is roads. King says right now Afghanistan is lacking a way to get the benefits of open economy and open government to people in rural parts of the country.

Gates Vote:
The new Defense Secretary will likely have a lot to say about both of these subjects. Robert Gates says one of his first acts as Defense Secretary is going to be a trip to Iraq. Gates’ confirmation by the full Senate is expected to pass this morning.

No expansion for Hy-Vee Hall:
Polk county Supervisors didn’t pass a measure to borrow money for expansion at Hy-Vee Hall. The 35 million dollar request would have added about 80-thousand sq ft of space. Two of the Sups say if someone wants to buy them out of the convention business..Feel free to make an offer…They just don’t think that’s what the CO is supposed to do. The two who voted for the expansion money say that horse has left the barn. We’re in whether we like it or not…and this expansion would make the place more successful and more profitable(actually it would just lose less money).

Homeland Security Comments:
If you’d like to be one of the people commenting on a Homeland Security program that tracks and files information about air travelers in this country to asses their risk to the traveling public…Good luck. The Homeland security Department made a big deal about how it’s extending the deadline to comment…More of the public can get involved. Now DHS has a website that I am sure we spend millions of dollars as taxpayers to keep updated. Nowhere on the homepage or the logical links does it tell you WHERE you can send your comments. If they really wanted the comments don’t you think they’d put up a link? Let you Email? It should be no surprise that DHS only has 57 comments. Then they’ll tell us the number of comments didn’t warrant a significant change in the program. Seems like a teriffic case of a non-user-friendly government system! Pat and I searched all over the place to try to link you guys up to a comment page for this – let us know if you have better luck finding one!TS

Those Lights!
I might just take a ride up to Ankeny to see the awesome holiday light display at 222 NE 16th. The homeowner doesn’t have kids…says he just wanted to give back to the community. Now that’s Christmas Spirit. Why do lights make us so happy? I don’t know a single person who hates Christmas lights. Now we need the snow…Jeriann?
These are pretty awesome! If you want to see it on your computer, pull up the video on 13 RAW. It makes my tiny lights display at home look absolutely pathetic!TS

Singing of Good Tidings and Ontime Arrivals:
Here’s the schedule we promised for holiday music at DM International Airport. They’ve been doing this for a few years. It’s a good way to de-stress a process than can otherwise be unpleasant at times.
I’m becoming a big believer in “music therapy!” When I’m totally stressed out, playing something I like (and often singing along) is a really great way to shake my funky mood!
Calvin wants to listen to music and “rock out” almost non-stop

nowadays. Yesterday he made me play his favorite band, “Rage Against the Machine,” in the car.
I looked in the rearview mirror and it looked like that Bohemian Rhapsody car scene from Wayne’s World. BOTH kids were banging their heads in rhythm together. Little rock stars…
TS
Emily:
My friend Emily (Lumpp)Horvath found out blog yesterday. Em is a teacher in the Chicago suburbs and one of our best friends in the world. Emily is a walking superlative…Her energy and passion on just about any topic is one of the reasons we love her. When I got her call about finding the blog it was a reminder of one of my favorite holiday traditions. We usually carve out as much time as we can to go see parents of some of our friends. Sally and I are lucky, not only to still have good friends from growing up; we are friends with their parents too. Emily’s parents are some of the smartest people I know and are good examples of the kind of people we were lucky enough to be surrounded by as teens. Don’t know why I felt compelled to share that…Just another holiday tradition.

jury Duty:
I remain stunned that Neither Sally or I have been called to jury duty in Polk County. We’ve been here almost ten years! But in one of life’s funniest moments, her mom forwarded a jury summons for Sally Rosenthal to us this week. It is from Cook County Illinois. Now we were married, in Cook County eight years ago….Sally hasn’t lived there full time for more than ten years and she traded in her Illinois License when we arrived in Des Moines. The number of bureaucrat screw ups that had to happen so Sally Rosenthal could be called to jury duty…Are mind boggling…They had to call a person who doesn’t exist anymore! It’s Chicago so it’s not that surprising. Maybe Sally is providing a second vote for someone..We’re always glad to be of service.
The really funny part is that they wanted her to fill out the form and mail it back to them requesting that she be excused from jury duty! Really? You want me to take the time to fill out a two page form, mail it back with a 37 cent stamp, and then let Cook County taxpayers pay to have someone process that form? Doesn’t that seem a little inefficient? I told the woman she can issue an arrest warrant for Sally Rosenthal or fine her or whatever they’re going to do. There’s no chance that the Cook County brain trust is ever going to figure out where she is again…So I feel safe letting them go after her.
The woman on the other end of the phone was actually really nice. She said just don’t open the next one and mark it return to sender…No person by that name exists. Good solution.

Bruswick Stew:
We’re having some tonight so when I get home…I’ll put the recipe up.

Mmmm…sounds yummy!
It’s Trisha now. I’ll add a couple more things before getting to work on material for tomorrow’s newscast…

Babies Make You Crazy
Literally. A new study finds new moms are 4 times more likely to go to the hospital with mental issues. Not just postpartum depression, but anxiety, bi-polar disorder, schizophrenia, etc. The first 3 weeks are the worst period, according to researchers, the whole first 3 months are pretty tough. A few contributing factors – sleep deprivation, biological changes, and adjusting to the huge responsibility.

This info seems pretty important. I don’t remember my doc asking too many questions about my mental health after Calvin’s birth. Looking back, I think in the first couple of weeks I had some sort of sleep-deprivation-induced anxiety problems. Crying about nothing, unable to sleep because I was worried about him, etc. The emotions and physical changes are so intense, no wonder mothers have a hard time adjusting! I found it a bit easier the second time around – maybe because I knew what 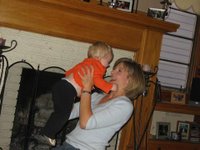 And now – it’s really fun!(most of the time!) I like this picture my dad took last time they visited. I have very few pictures of myself with the kids – I’m usually the photo-taker – and some day it will be fun to look back at some of these precious times.

So anyway, if you know a new mom, ask how she’s doing…. how she’s really doing, and see if there’s anything you can do to help out.

Just wanted to say thanks – to all those of you who take the time to comment on this blog! Pat and I love reading your comments, and are glad to hear that you’re being entertained and informed by what we write!

(It’s sometimes hard for me to believe that anyone besides my close friends and family really care about the little details of my daily life, but I’m glad to know that some of the stories bring a smile to your faces!)