Good Morning, everyone!!!
Pat again pulled the graveyard shift to fill in for our associate producer, so I (Trisha) get to be the blogstress for the day.

Hey – I want to know what people think of our morning show and blog content – honestly! If there’s something you like, dislike, or want to see more or less of, here’s your chance to let us know..just write in comments on this blog. I can’t guarantee we can accomodate every suggestion – but it gives us good food for thought as we put our content together each day.

HURRICANES, NOW AND THEN 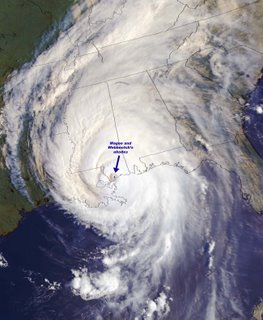 Katrina hit the gulf coast one year ago. Remember where you were? ( I was sitting in the anchor chair, quite pregnant and uncomfortable as I remember!) The strange thing looking back is, I remember at first remarking how it seemed like good news that the eye of the storm missed New Orleans, the most populous area. It wasn’t until later when the levees failed that it became clear what a catastrophe the storm would become.

Today President Bush is in New Orleans for ceremonies, Mississippi is burying two unidentified victims, dubbed “Strength” and “Will.” It must take a heck of a lot of both of those things to survive in such devastated areas. 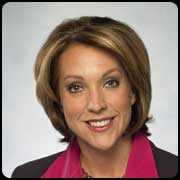 Sonya Heitshusen has been putting together some very eye-opening reports on Katrina, one year later. She and photojournalist Brad Argo went back to Louisiana recently – watch this week on our 10pm newscast to see their reports. (and check our homepage for last night’s story!) 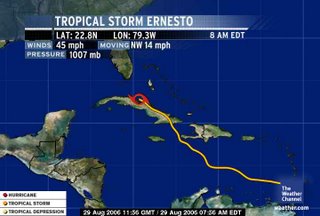 And – Ernesto is threatening the Florida Keys. Jeriann says unless it hurries up, its path will
make our Labor Day weekend pretty wet. Move on, Ernie, I say!

SUPERBOWL OF AGRICULTURE
What else but the Farm Progress Show? It starts in Amana this morning, running through Thursday. They tell us they’ve spread rock out there to prevent a muddy mess.
I will never forget covering the show when it was in Henning, Illinois 4 years ago. The mud was SO BAD trailers were stuck out there for days. My boots were CAKED so heavily I could hardly lift my feet.

DEBATES
Like to see a good heated debate? Gubernatorial candidates Jim Nussle and Chet Culver have settled on 3 televised debates.

KIDS’ CHOLESTEROL CHARTS
A new system will work kind of like a growth chart to predict if your kids will have bad cholesterol as they get older! 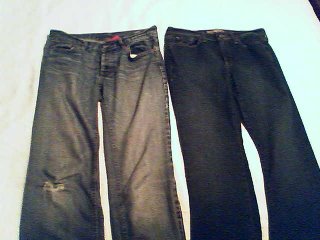 Wow – does it feel like fall or what? Yesterday’s weather reminded me how badly I need to replace the only pair of jeans I ever wear. So I did – before and after shots are just to the right here. After several traumatic no-go’s in the fitting room I settled on something that doesn’t ride so low I look like I’m 13, or so high I get the “mom jeans” effect.

Okay – I know I SHOULD toss the old ones in the trash – but they’re so comfy, I just can’t part with them yet. I know some day Stacy London and Clint Whatshisname from TLC’s “What Not to Wear” will come out from behind a corner and tackle me, forcing me to part with the ratty things! 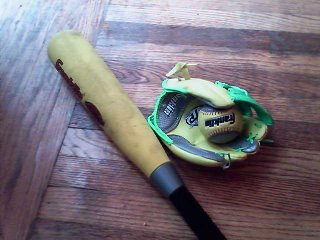 Today Elizabeth Klinge put together a report for our morning show on how important it is not to stress your kids out by overscheduling them. I AGREE!! I haven’t put my 3 and a half year old in any organized sports or activities yet, aside from preschool – but my husband and I try to indulge any interests he has by helping him give things a try at home.

There’s one problem with this. Calvin likes sports – and I have ABSOLUTELY NO ATHLETIC TALENT WHATSOEVER. It’s humiliating, and totally laughable. Yesterday, he was all about playing baseball. He has a great pitching arm – and I could barely hit his pitches! (Did I mention he’s not even 4 yet?) I did my best to teach him something about the sport, but I know he’ll be in much better hands under the direction of my husband and brothers. But hey, at least I’m willing to try!

Finally, I thought it would be fun to introduce readers to a few behind the scenes VIP’s w 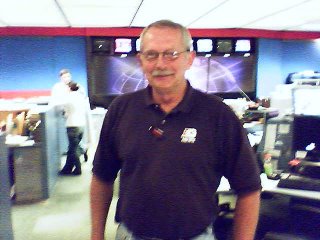 ho make our morning show happen. This is Fred Redman, the capable pilot of Chopper 13! When I’ve been up in Chopper, I’ve felt very safe in Fred’s care! He’s been flying for 31 years, including flying Hueys for the U.S. Army in Vietnam. 2 out of his 8 (yes, 8! Ages 15-37) children are also pilots. Fred admits his job is pretty cool, and “Yes, we do have an awesome view” of Iowa.

He’s right. Everything looks beautiful from the air – especially in a helicopter when you feel like you’re floating.

Thanks for reading and watching. Have a great day!