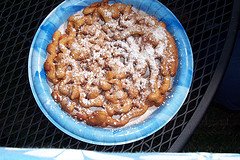 Ah, Fair time. For all of you out-of-staters, you’re really missing something if you don’t try the Iowa State Fair at least once. I met a father and daughter Friday from San Fran who paid 300 bucks a piece on EBAY to make sure they got to see James Taylor while they were at the fair. (BTW, Taylor gave the shortest show I’ve ever attended. Plus, he took nearly a 30 minute break in the middle. To his credit, he did two encores and the second one had at least 3 or 4 shows. But since we couldn’t even really see the stage from our seats, we were expecting a little more.) I’m told the Gov and Lt Gov took in the show. I didn’t see them. Did see Patty Judge. That’s not easy in a crowd.

A few of the presidentials and other politicos did the rounds at the Fair. Seemed to be a little confusion with the Pataki peeps. His camp told me to meet them at the Crystal Studios. When we got there, I found out they had gone to the Pork Producers’ tent. No big deal, except we had just come from there. So we had to carry all our crap back through the masses a quarter mile or so back to the tent to get him. We arrived, sweat-soaked in the hot sun, and just caught the end of his remarks. Catch you next time, Gov. Safe bet he’ll be back, I guess.

But at least we got the chance to talk with him. We wanted another prez possible, our Gov Tom Vilsack. But his avail was offered to members of the foreign press. The foreign press. I remember when the Iowa press could talk to him.

Newt Gingrich mentioned Joe Lieberman would have likely won in Connecticut if the foiled terror plot happened closer to the Democratic Primary.

Senator Tom Harkin praised the British government for stopping the terrorists. He criticized the U.S. efforts. He wondered how security would be here if U.S. hadn’t spent $300 billion plus on the Iraq war.

Congressman Tom Latham defended the efforts. He pointed out the $33 bil the U.S. spent to upgrade airport security and said it’s a great success for the U.S. to help stop the terrorists. 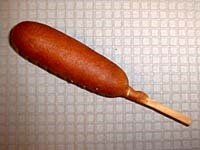 Even more randoms…Latham told me he can’t do without a corn dog at the fair. Although his wife won’t let him get mustard on it (Too hard to get out of his shirts?)
Harkin said one time a year he has to have a funnel cake with just powdered sugar. None of that other stuff.

For the record, we did the funnel cake thing, too. Although, ours was glazed and powdered. We tried those tator ribbon fries, as well (I think that was their name–sort of life thick potato chips) All good. Good thing this only comes once a year.

MercyOne ‘Holiday Guide’ Provide Ways to Give to Patients, Providers and Hospitals During Pandemic

‘National Turkeys’ Return to Ames to Live out Their Pardons

Mix of sun and clouds Precip: 0%

MercyOne ‘Holiday Guide’ Provide Ways to Give to Patients, Providers and Hospitals During Pandemic

‘National Turkeys’ Return to Ames to Live out Their Pardons