Pat and Liz handled the show this morning so I could spend the day on assignment! I have a couple minutes free right now between my next shoot and Pat is crazy busy with an assignment of his own, so being the caring, considerate, and eager-to-help colleague I am, I told him to sit back while I got a little bit of blogging done for today!

Today….. in……Iowa
I missed a good technical glitch this morning – it seems the intro to our newscast kept getting stuck somehow – so you may have noticed some very unnatural pauses in the opening.
Pat says Liz didn’t miss a beat. When the camera opened up to the two of them he said “Good morning, I’m Patrick Dix. ” She said, “And I’m Elizabeth…………… Klinge.” Gotta be able to laugh at yourself – I think the really obvious glitches on the air usually seem worse when we try to pretend they didn’t happen! Acknowledge with an apologetic smile, and then move on… that’s the way to go.

State of the Union
Okay – be honest, how many of you watched beginning to end, even the Democratic response afterwards? What did you think? I caught almost all of it – my favorite part is usually watching who applauds and stands for what issues, and who sits on their hands. It was really interesting watching Pelosi’s reactions over the President’s shoulder. I felt he had a strong performance, but there was obvious tension with the other party now in power, and many Republicans in obvious disagreement with him over some of the major issues (Iraq and immigration, most notably.)

Iowa Sens. love ethanol talk!
In case you missed this part of the speech, Sen. Chuck Grassley nearly lept up to the ceiling when the President talked up a push for more ethanol! Afterwards, I saw Sen. Tom Harkin also have a 5 second handshake exchange with the president, and that was the one thing he mentioned as well. Today our news team will be doing more follow up on how Iowa could be affected by a nationwide increase in ethanol production and demand.

Polk City Soldier Death
Our news team brought the sad news that a reserve soldier from Polk City was among the troops killed Saturday in Iraq in the Black Hawk helicopter that went down. The soldier’s name was Cmd. Sgt. Major Marilyn Gabbard. She’s the second Iowa woman to die in Iraq. She leaves behind a husband and reportedly a stepdaughter. We expect to learn more official news from the National Guard today.

Can’t beat em, join em!
The snow’s not going anywhere, so this is the time of year when you have to either go somewhere warmer,become a terrible whiner, or just embrace the “winter wonderland”. 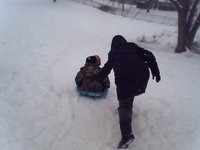 Here’s an awesome Iowa winter moment: Tuesdays are my day to read with kids at Calvin’s preschool. When I showed up at 2pm, the clasroom was empty. All the coats and boots were missing too.
I looked out the window and found the kids all out sledding down a hill in the schoolyard, under a really pretty light snowfall. Luckily I had my 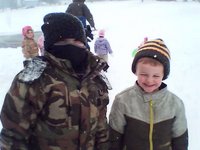 boots on so I could go see this magical little moment for myself. (Here’s Cal with a classmate so bundled up I couldn’t even tell who was inside!)
Anyway, I was so refreshed to see his teachers weren’t afraid to throw their “studious” plans out the window for a precious hour of wintertime fun! His teacher told me, “this was too good to pass up!” The kids LOVED it. For just a few minutes, I actually liked winter again.

Back to work – have a good Weds. everyone!
Trisha