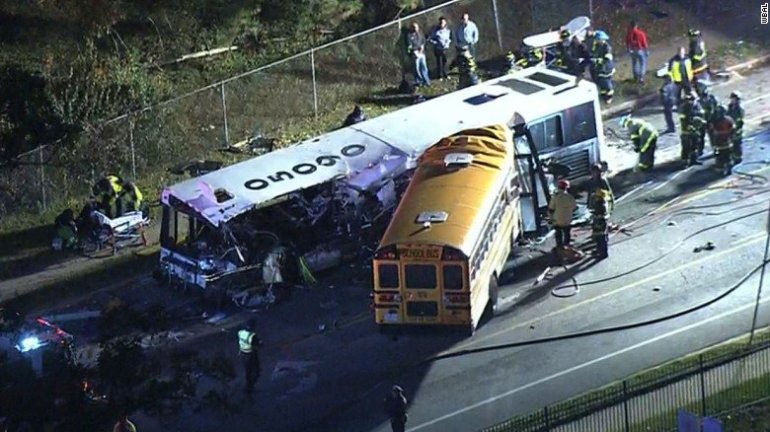 BALTIMORE, Maryland — At least three people were killed when a school bus and a commuter bus crashed in Baltimore Tuesday morning, police said.

Video from CNN affiliate WBAL shows the school bus wedged into the side of the commuter bus, with firefighters surrounding the scene.

Baltimore Police spokesman T.J. Smith said he didn’t have details about who was killed in the crash, which occurred around 6:30 a.m.

DES MOINES, Iowa -- After its meeting Monday night, the Des Moines School Board could have a start date for hybrid learning in the district.

Currently, district schools are not in compliance with the state as they continue to have most students learn 100-percent online. The district says this is in the best interest of students by keeping the risk of transmitting COVID-19 low.

OMAHA, Neb. (AP) — A white business owner charged with manslaughter for fatally shooting a Black man during protests in Nebraska has died by suicide days after his indictment, his attorney said Sunday.

Jacob Gardner, of Omaha, Nebraska, was found dead Sunday outside a medical clinic in Hillsboro, Oregon, the Hillsboro Police Department said in a news release. His attorney, Stu Dornan, said in a news conference Sunday evening that Gardner's death was a suicide.

ATLANTA (AP) — Joe Biden is using a campaign cash advantage over President Donald Trump to add Republican-leaning Georgia and Iowa to his paid media footprint, bringing the Democratic challenger’s television and digital battleground map to an even dozen states.

The expansion reflects Biden’s newfound status as a fundraising behemoth and his campaign’s longstanding promise to set up “multiple paths” to the 270 electoral votes required to win the presidency.