MAHASKA COUNTY, Iowa — Authorities have discovered the body of a woman in the South Skunk River in Mahaska County, according to the Iowa Department of Public Safety.

Members of the Mahaska County Sheriff’s Office discovered the body near the Glendale Access shortly after 3 p.m. Tuesday.

Authorities are investigating how she died and ended up in the river. Her identity is not known at this time, but an autopsy will be performed at the state medical examiner’s office. 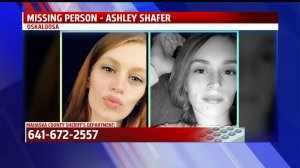 Authorities are also searching for 24-year-old Ashley Shafer, who was reported missing to the Oskaloosa Police Department on Monday.

Anyone with information to Shafer’s whereabouts or the body found in the South Skunk River is asked to call the Mahaska County Communications Center at 641-672-2557.