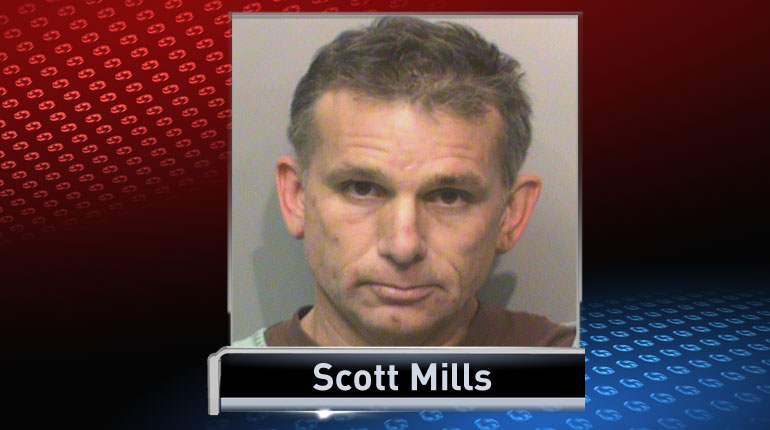 CLIVE, Iowa – An arrest has been made in the case of a January burglary and police chase.

Steven Alan Mills, 47, has been charged with third-degree burglary, two counts of felony assault on a peace officer with a weapon, second-degree theft and felony eluding.

Police responded to the Seven Flags Event Center in Clive during the early morning hours of January 20.

Police said Mills into the side door and was able to bring a truck inside the building. He then rammed two ATMs.

An officer responding to an unrelated call heard noises coming from the building and went to investigate. The officer was outside of his car when the suspect took off with an ATM in the truck and side-swiped the squad car. Officers chased the Mills through West Des Moines. A second squad car was also hit during the pursuit.

The pursuit came to an end after an hour between New Virginia and I-35 in Warren County and the driver took off on foot in a wooded area.

Officials were able to identify Mills using DNA evidence. Mills was already in the Polk County Jail accused of stealing an ATM from the Iowa Events Center.

WASHINGTON (NewsNation Now) — NASA is expected to announce a new discovery about the moon on Monday.

The space agency plans to share findings from its Stratospheric Observatory for Infrared Astronomy (SOFIA) mission during a press conference at 12 p.m. EDT.

DAVENPORT, Iowa (AP) — A woman was shot to death inside a busy Chuck E. Cheese restaurant in Davenport, police there said.

The shooting happened just after 7:30 p.m. Sunday and was the second of two fatal shootings Sunday in Davenport, the Quad-City Times reported. Police said a woman shot another woman inside the restaurant, then fled the scene.

DES MOINES, Iowa-- Despite the temperature dropping, local restaurants want to extend patio season as long as they can. The nonprofit, Greater Des Moines Partnership, has stepped in to help.

The Greater Des Moines Partnership has a new program, ‘Extend The Season’, that provides restaurants with free patio heaters to be able to keep their outdoor seating available.