AMES, Iowa — We are just days away from the start of the college football season. But for those who are planning to make their way to Ames and find somewhere to park for Iowa State’s season opener against Northern Iowa, they may be in for a rude awakening thanks to a new game day parking ordinance.

“What we saw was that we’re always competing with some of the private lots where you can park on game day. So it was actually more convenient and cheaper to park on a city street than it was to park in some of those private lots,” Ames Police Commander Jason Tuttle said. “So we saw that and we get a lot of complaints from our permanent residents here in Ames that live in those areas about the parking on the streets. They are getting some sidewalks blocked [and] driveways blocked. So, in the end, it really comes down to safety. If we have cars parked on both sides of the street we can’t get firetrucks down some of those areas. So we are wanting people to park legally throughout some of the available lots throughout the city [instead].”

Last year parking tickets were just $20. Now if you park illegally on one of the streets you’ll pay a fine of $40. The city has more than 500 signs posted all throughout these impacted areas stating the new ordinance that goes into effect everyday home game day from 6 am to midnight.

Channel 13’s Whitney Blakemore spoke with numerous residents who live just blocks away from the stadium who say they are happy with the change, but feel only time will tell if it will actually work in keeping their roads safe.

“We’re sure hoping that’s the effect. Voluntary compliance is our goal, so we will continue to run the numbers as the year progresses here to see how much of an effect it’s having in those neighborhoods,” Commander Tuttle said. “We’re also going to have some extra parking officers out telling [fans] to park in other areas of town. So we’re hoping between social media, press releases, and parking officers out there that this will really deter these folks and encourage them to park in a legal area in another part of Ames.”

Commander Tuttle said he’s confident there are enough spaces to park legally throughout the city even for the games against in-state rivals where there’s an increase in traffic. He said you just may have to walk a bit farther or take advantage of things such as CyRide or carpooling.

The areas affected by the increased fines are shown in pink on the map below: 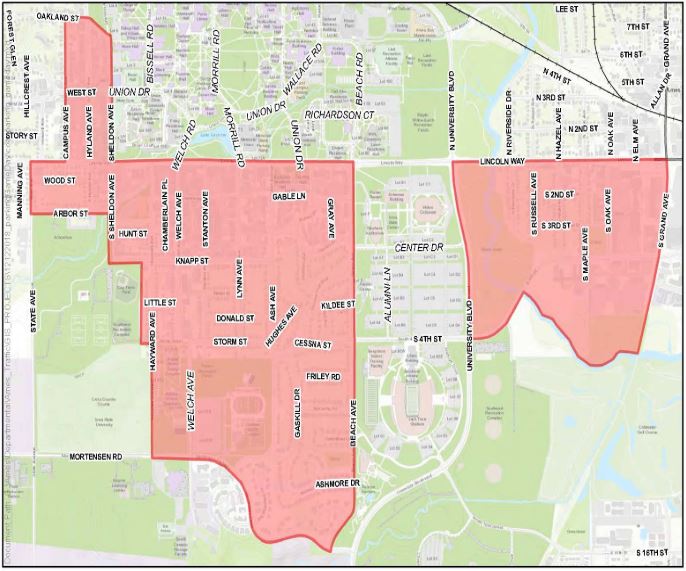