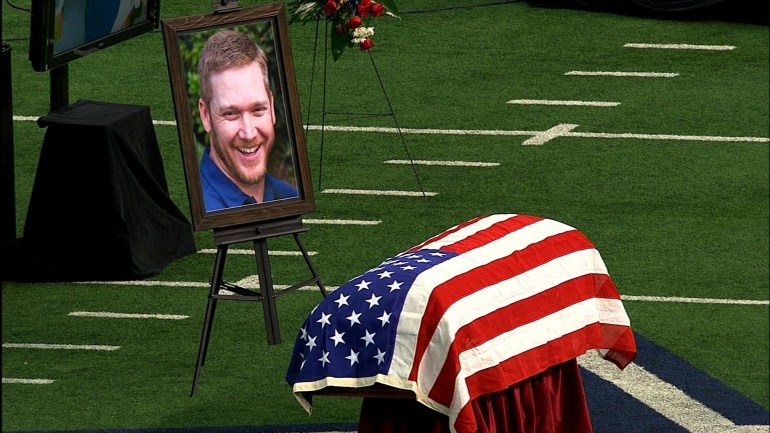 Since being diagnosed with post-traumatic stress disorder in July 2011, her son had been in and out of Veterans Affairs clinics, she said. He showed no progress in two years, and his erratic behavior continued to spiral out of control.

Jodi Routh worked as an aide at the same Midlothian, Texas, elementary school that Chris Kyle’s children attended. Kyle, of course, wrote “American Sniper,” the basis for the blockbuster Clint Eastwood film, and she had heard that The New York Times bestselling author worked with fellow veterans who were having a hard time adjusting to life back home.

“She approached Chris Kyle as he was dropping off his children and asked him if he would help her son. At that point, she had been trying to get (her son) care at the VA, and he was only getting worse,” according to Laura Beil, author of the ebook, “The Enemy Within: The Inside Story of Eddie Routh, the Man Accused of Killing Legendary ‘American Sniper’ Chris Kyle.”

After the deaths of Kyle and his friend, Chad Littlefield, Beil, who also is a contributing editor for Men’s Health magazine, spent almost four months with Eddie Routh’s family detailing the Marine’s struggles after serving in Iraq and Haiti.

“At the end of the conversation, (Kyle) said, ‘I’m going to do everything I can to help your son.’ She actually cried at that point because it was the first time in over a year that anyone had said that,” Beil told CNN.

Eddie Ray Routh, 27, grew up in the Dallas suburb of Lancaster, about 20 miles east of Midlothian, Kyle’s hometown. He faces murder charges in the 2013 deaths of Kyle, 38, and Littlefield, 35.

The two men had picked Routh up that fateful day and, as a form of therapy, took him to a remote 11,000-acre resort with a gun range in Glen Rose, Texas.

Shortly after his apprehension, Routh confessed to authorities and family members that he killed both men, police said. After becoming aggressive with guards and refusing to give up a spork and dinner tray, he was placed on suicide watch under 24-hour surveillance in the Erath County Jail.

Since July 24, 2013, when District Court Judge Jason Cashon filed a gag order in the case, nobody associated with Routh’s trial has been permitted to speak to the media.

His family members and those close to him declined interview requests from CNN. Thus, little is known about Routh, except that attorney J. Warren St. John will attempt to make the case that his client is not guilty by reason of insanity.

Six months before a hunting guide found Kyle and Littlefield’s bodies in Glen Rose, police caught up with a shirtless, shoeless Routh walking the streets of his hometown. He was crying and smelled of alcohol, police said. His mother told police that Routh had just had an argument with his father who said he was going to sell Routh’s gun. Routh left the house, threatening to “blow his brains out,” she said.

The former Marine was suffering from PTSD, though his family didn’t understand what he was going through, according to a September 2, 2012, police report.

He would be placed in protective custody and sent to Green Oaks Hospital in Dallas for a mental evaluation.

The following February, he arrived at his sister Laura Blevins’ Midlothian home in Kyle’s black Ford pickup truck. There, according to the original arrest warrant, he told his sister and his brother-in-law, Gaines Blevins, that he’d killed Kyle and Littlefield at Rough Creek Lodge Shooting Range, 70 miles away.

In a panicked 911 call, Laura Blevins tells a dispatcher that her brother had been “acting weird” and was recently in a mental hospital.

“He told me that he committed a murder, and I’m terrified for my life because I don’t know if he is going to come back here,” she said.

“He said that he killed two guys,” Laura Blevins replied. “They went out to a shooting range. Like, he’s all crazy. He’s f***ing psychotic. I’m sorry for my language. I don’t know if he’s on drugs or not, but I know that he’s been.”

The same day of the murders, Tim Xeriland had been waiting for Routh to come finish mowing his lawn, a job Routh had started a week earlier but hadn’t finished.

The men struck up an acquaintance in their suburban Dallas neighborhood in the fall of 2011, and Xeriland, also a former military man, could tell Routh was struggling financially. He offered Routh odd jobs like cutting the grass and repairing Xeriland’s garbage disposal and fence.

Routh seemed to be a “nice guy,” who was “quirky and had his own weird style,” Xeriland said. He was “more of a Forrest Gump-type guy than a serial killer,” Xeriland told CNN.

“I didn’t see him as a super-motivated, change-the-world-type guy. He needed help, but I didn’t realize how much help. He was out of the military, he was struggling and it seemed like if he could get his legs back underneath him, he could be alright,” Xeriland said.

Once Routh “got mixed up in drugs” — an open secret in their neighborhood — things became more problematic, he said.

“He was living on the edge with all this stuff — beat down, broken-down car, messed up on drugs,” he told CNN.

Xeriland doesn’t know exactly what drugs Routh was using, but he describes the vet’s behavior as “jumpy and wired.”

Routh wasn’t too dependable, Xeriland said, and often showed up at Xeriland’s house “dressed in full camouflage” and driving a “really bizarre-looking VW bug that had a wind-up thing on the back to make it look like a toy car.”

Laura Blevins, too, had encountered strange behavior from her brother long before he was accused of murder, said Laura Beil, the author.

Routh had been working a summer job in Houston and came down with heat stroke. Laura Blevins drove to Houston to bring her brother home, and on the way back, she couldn’t make sense of the things he was saying.

“He starts talking really weird stuff, like there was a tapeworm inside of him, and his insides were being eaten. And he kept making her stop to eat, plate after plate of food, saying that something was eating his insides,” Beil told CNN.

In another incident shortly before Routh’s arrest, “he had holed up in (his girlfriend’s) apartment with a knife, and he said they couldn’t leave because somebody was going to come get them,” Beil told CNN, recalling her conversation with Routh’s girlfriend.

Routh served in the Marines from June 2006 to June 2010. His time in the military included a 2007 tour of duty in Iraq and a humanitarian mission to help the victims of the devastating 2010 earthquake in Haiti.

A corporal, he specialized as a small-arms technician and repairman. He received a number of medals during his service, including the Marine Corps Good Conduct Medal and a Humanitarian Service Medal.

In the 2013 New Yorker profile “In The Crosshairs,” Routh’s father told author Nicholas Schmidle that his son spent much of his time guarding prisoners, and he felt some of rules that applied to prisoners were too strict and inhumane.

Early one morning, Routh called and asked, “How would you feel if I killed a kid?”

” ‘You gotta do what you gotta do to survive and come home,’ ” his dad replied, according to the profile. “That’s a dad talking to his son. I told him, you know, ‘It’s you or them. Come home.’ ”

According to Beil, Routh’s family members frequently bring up his trip to Haiti as one of the tipping points in his behavior.

Leading up to Kyle’s death

In early 2012, Routh was arrested and convicted in Lancaster for driving while intoxicated, a misdemeanor. Like his family, his girlfriend at the time had grown concerned with his increasingly erratic behavior, and his hard drinking and prescription drug combinations.

According to the New Yorker article, Routh’s father said his son was prescribed eight medications, which, according to Raymond, were placed in “one of those gallon baggies.”

Among the drugs were lithium, which treats mania, prazosin, which can help decrease nightmares, and Zoloft, an antidepressant commonly used for PTSD, the article said.

The cocktail of pharmaceuticals “made Eddie worse,” his father told the magazine. “I ain’t no doctor. I ain’t no rocket scientist or nothing, but I could tell a difference in him.”

Before the gag order, Beil said, Routh’s family and girlfriend were apprehensive about sharing details of his life. His mother didn’t want to come across as disrespectful of the Kyle and Littlefield families, or appear to be making any excuses for her son.

“I guess for them it was kind of like watching a car crash in slow motion. You can see things getting worse and worse, but you feel powerless to help. And that’s how she felt and then it ended in this tragic way, so she was pretty devastated. The whole family is,” Beil said.

So, does anyone have insight into what could have driven Routh to commit the crimes of which he’s accused?

Capt. Jason Upshaw of the Erath County Sheriff’s Office told reporters a day after the shootings that only Routh knows the answer to that question.

The Kyle and Littlefield families — along with a captivated America — will be hoping for a better answer as Routh’s trial gets underway this week. But two years after Kyle’s and Littlefield’s deaths, it’s unclear if they will learn any more of the haunting details that led to the killings at Rough Creek Lodge.