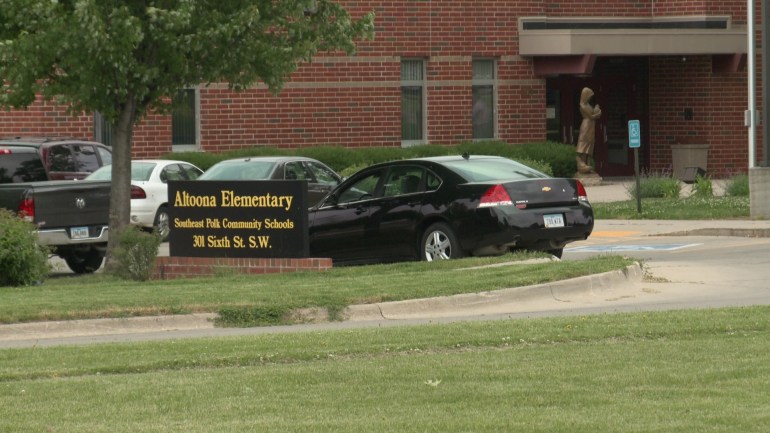 ALTOONA, Iowa — A bomb threat Monday has forced the evacuation of Altoona Elementary.

According to the Altoona Police Department, the school was evacuated at 11:54 a.m. after an automated phone call posed a threat.

The Altoona and Des Moines police departments completed an interior and exterior search of the building, and nothing suspicious was found in or around the school, police say.

Noelle Scalco lives right next to the school. Her son attends the elementary school.

But the school says situations like this have been thought through by the district.

“We have those emergency procedures in place, and we practice them, and the kids knew this wasn’t a drill and the students followed along. That’s why we do drills and practice these things,” Hansen said. “You have to be prepared for every situation, and at Southeast Polk, we are prepared. When things like this come up, we have practiced and it makes it a lot easier to handle.”

Scalco’s son, Christian, said he thought it was a drill when school officials took the students to the nearby church. He also said he didn’t understand why someone would threaten his school.

“I was just like, why would anyone want to bomb this place? What made them do that to us?” Christian said.

June 2 is the last day of school for Altoona Elementary.

Authorities are working with the Southeast Polk School District on the investigation.

Check back for updates.

WEST DES MOINES, Iowa - No one should ever go hungry, especially on Thanksgiving. That’s why The Hall DSM opened its doors on the holiday to hand out free meals.

“The number of people that cannot afford to feed themselves is actually gone up since this pandemic started and it has not subsided,” Nick Kuhn, managing partner of The Hall DSM, said. “So, combine that with the fact that no one's really traveling, which means there’s going to be a lot of people alone for Thanksgiving. So we thought let's just open the place up.”

Alec Johnson of Des Moines and AJ Speck of Denver were walking their dogs. Friends Blake Van Loon and James Howard of Indianola were making Instagram pictures. Minnesotan Jennifer Easton took a break from her drive to Kansas City. Tiffany Floyd, from Arizona, and Josh Moore, a northern Iowan, were out for a walk on their first visit to Des Moines. They all took a few moments to share their thoughts on Thanksgiving in 2020.

(WJW) — You probably already know not to feed your pets that last piece of holiday chocolate, but there are a number of other Thanksgiving scraps that you should avoid scraping into the dog bowl.

The ASPCA lists a number of other common foods that aren't suitable for pets, ranging from avocados to macadamia nuts. But the your holiday plate may actually be loaded with more potentially dangerous foods for your dog than most other meals.