DES MOINES, Iowa  —  The Animal Rescue League of Iowa has pulled 36 cats from a Des Moines home and say more are still in need of rescue.

70-year-old Paula Schaefer is charged with five counts of Animal Neglect and one count of Animal Contest.

The ARL removed 32 cats, mostly kittens, from Schaefer’s Des Moines home on Tuesday.  Four more cats have since been rescued.  The ARL says more cats are in a crawl space of the home and still in need of rescue.

Rescuers are wearing protective suits and respirators as they work in the home.  They say the ammonia smell from all the cat urine in the home makes the air too toxic to breathe.  The home is reportedly filled with fleas, cockroaches, garbage and piles of cat feces.  All of the cats taken from the home have respiratory infections and numerous other conditions tied to the filthy conditions they were living in.  One six-week-old kitten died from flea bites.

The ARL says this is the fourth cat hoarding case they’ve responded to in the last 10 weeks. 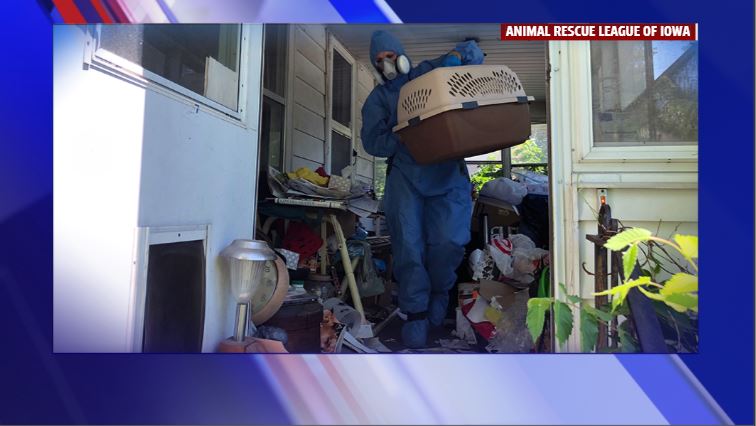 AMES, Iowa -- The Story County Board of Health has sent a letter to the Board of Supervisors recommending a countywide mask mandate.

“Part of it is because we've been waiting for a masked mandate, and it's not going to happen. In our county, we're looking at somewhere of 30,000 students coming back. And that's a big population. We're looking on the possible horizon of home football games where up to 50,000 to 100,000 people can invade Ames from not only all over the state but from other states. And to be quite honest, we're kind of scared,” Story County Board of Health member Dr. John Paschen said.

ALTOONA, Iowa -- With school just around the corner, the clock is ticking to make sure students are dressed and equipped for class.

"She grew two, three inches," said Ashley Jurey, a mother of two visiting from Waverly, Nebraska. "They both outgrew everything they had from last year."

LIVE BLOG: Aaron Rodgers speaks to media for the first time in camp

Savoring the Moment: Rodgers not dwelling on the future with Packers