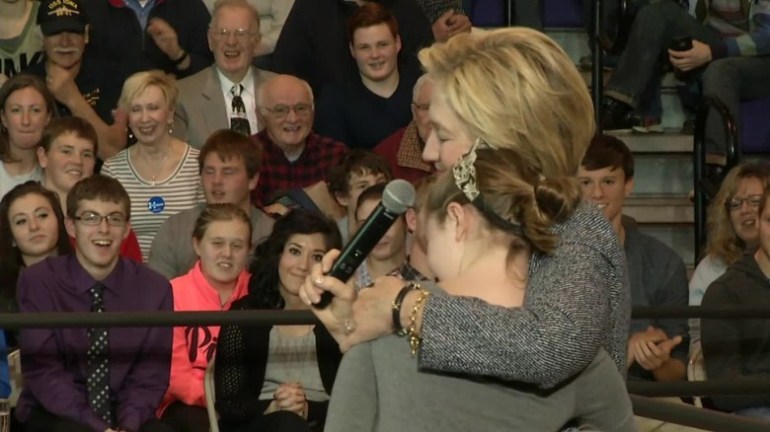 Hannah Tandy didn’t attend Hillary Clinton’s town hall event on Tuesday expecting to talk about the bullying she faces, but her question about it stirred the audience.

“What are you going to do about bullying?” the 10-year-old Hannah asked, standing in the front row of Clinton’s event.

Clinton responded, “Can you tell me a little bit more about why that’s on your mind?”

“I have asthma and occasionally I hear people talking behind my back,” said Hannah, a fifth-grader eliciting “awws” and applause from the audience and a long hug from the former first lady.

The question was personal for Hannah, who told CNN after the event that she knows her asthma and medicine to control the ailment makes some of her classmates uncomfortable.

“I never dreamed that this would happen,” Hannah said. “I was hearing her talk about so many people she had met that were worried about certain things and I never heard her mention anything about someone asking about bullying.”

She added, “I just thought, there are a lot of kids out there who are getting bullied way worse than I am and it should stop.”

Clinton was clearly moved by the question. While she sometimes responds to voters with non-emotional pragmatism, Clinton’s voice cracked when she spoke with her young questioner.

“Bullying has always been around but it seems to have gotten somehow easier and more widespread because of social media and the Internet,” Clinton said. “People can say something about somebody without having to look them in the eye or see them walk by, and so I think we all need to be aware of the pain and the anguish that bullying can cause.”

On Wednesday, Trump tweeted, “The Hillary Clinton staged event yesterday was pathetic. Be careful Hillary as you play the war on women or women being degraded card.”

For her part, Clinton went on to suggest more work needs to be done to increase bullying awareness in school with teachers, parents and administrators.

But the question was more personal than policy for Clinton, someone who is regularly thrust into the spotlight in less than kind terms.

On Monday, Donald Trump, the Republican front-runner, said at an event that Clinton got“schlonged” when she lost to then-Sen. Barack Obama in 2008. The vulgar comment has been widely criticized and the Clinton campaign has declined to comment, but the remark has started yet another conversation about the tone of the 2016 race.

“You are looking at somebody who’s had a lot of terrible things said about me and I am well aware of the fact that it’s really easy to do that,” Clinton said Tuesday, less than 24 hours after the Trump incident. “Luckily, I’m old enough where it doesn’t particularly bother me, but I can’t even imagine what it’s like to be you know a young person in today’s world where that’s coming at you all the time.”

Clinton added, in an apparent reference to Trump, “We shouldn’t let anybody bully his way into the presidency.”

The town hall ended shortly after that moment and Hannah cried as she walked out the door with her friends patting her on the back.

“That was amazing,” she said, still shaking.

More than 3.2 million students are bullied each year, according to the National Association of School Psychologists, with 17% of American students reporting being bullied two to three times a month.

Reached by phone shortly after the event, Hannah said she was still processing the moment that left her mind “blank.” What she did know, however, was that the moment would stick with her forever.

Lexie Tandy, Hannah’s stay-at-home mother, said she wasn’t surprised that her daughter would ask a question about bullying.

“This is something we have actually talked about before,” said Tandy, a registered Democrat but undecided voter. “We have talked about bullying and how … if bullying is to be put to a stop, the grown-ups have to be a good example of what the behavior is supposed to be for the children.”

Tandy said that can be hard at times, especially with how much politics coverage ends up on her Iowa television, who said she “filters” what news her daughter and 7-year-old son Eli can watch.

Hannah won’t be old enough to caucus in 2016, let alone 2020. But her interaction on Tuesday cemented her feelings for the Democratic front-runner.

“They all have flaws. They all have good parts to what they say. Nobody is perfect,” Hannah said. “But after hearing what Secretary Clinton talked about, I’ve definitely sided with her.”

DES MOINES, Iowa -- What began as a peaceful protest in response to the death of George Floyd has escalated between protesters and police in Des Moines.